Until Our Paths Cross

I thought you were a veteran?

I've been a lot of things since. Most of them carry a life sentence.

You might all be surprised to know that I woke up at 3 A.M. Eastern Standard Time U.S. to watch The Mandalorian season 2 stream on Disney Plus. Perhaps I should be up front and say this now, so everyone who reads this and is a fan of the series doesn't get heated...

There, now that's out of the way, let's proceed, shall we? So yes I streamed The Mandalorian at 3:01 A.M. because it's been how many months since my last dose of Baby Yoda? Yeah, a few of you out there will grudgingly admit you did the same damn thing. You know how the saying goes about the pot and the kettle. Yeah. So don't judge. 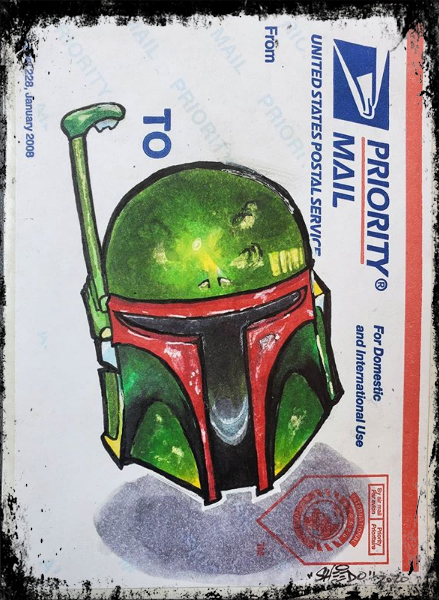 The opening scene was Mando and Baby Yoda walking down what appeared to be a dark, faintly lit alley way of what reminds me of Detroit in space; there are broken, flickering street lights, graffiti painted on all the walls of every building, and unsavory beings around every corner. I'm not actually sure which planet it was, just that it was in the Outer Rim. There are some sort of red eyed creatures hiding in the darkness, watching every carefully treaded step. And of course Baby Yoda is cruising in his custom made pod that Kuill had designed then weld together, sadly before Kuill the Ugnaught's untimely demise. No one will ever again say in Nick Nolte's recognizable voice the way he had. Some people might think Star Wars is stupid, and admittedly even as a fan I can say some of the movies are very poorly written, however, if you pay attention and listen to the things some of the characters say you begin to realize that there are many insightful views that really make you think. And it's my opinion that Kuill was a character that helped make Mando see things in a different light. And Kuill helped Mando grow immensely.

So back to cruising Baby Yoda, in his pimped out pod. They meet up with a Twi'lek bouncer watching a back entrance door that leads to an underground fight. Patrons comprised of thieves, thugs, smugglers, gangsters and the like are cheering ringside, some agitated because their bet had gone sour. Gamorreans are fighting in a ring to the death. Mando is there to try finding other Mandalorians and the Jedi, perhaps even Baby Yoda's species. In this particular episode he wanted to find other Mandalorians, and after kicking a few asses when the character in question tries hijacking his beskar armor, he is told that there is a Mandalorian on Tatooine. Naturally people are going to think this is the infamous Boba Fett. But, it is not. It's a small time marshal played by Timothy Olyphant (Go, Gone In 60 Seconds, The Hitman, Deadwood (the television series) and Deadwood (the movie), who had acquired Boba's armor when he had bought it off of some Jawa's (the sand people) that had found him in the sand dunes.

Mando is cool and collected even in his anger that this marshal is an imposter, wearing Mandalorian armor he never earned himself. And the marshal smiles after strolling into the mining town's cantina doorway, asking for two cups and a bottle. Then tells Mando he had "never seen a real Mandalorian". Mando demands that the armor be given to him, the marshal is defiant. And before any sort of altercation occurs, a Krayt Dragon rolls right into town under the sand to fuck shit up and eat a bantha.

The marshal then agrees to give Mando the armor if he can help him kill the Krayt. Obviously this is a man who cares about his towns folk and believes in protecting his people, as noble as that is. Long story short, the mining towns people and the Tusken Raiders (who originally were not on good terms) come together and work with eachother toward reaching a common goal: to kill the Krayt.

I had no idea that Krayt Dragons just vomit like the exorcist when they want to disperse a huge crowd of people. Anyway Mando blew it up with a bantha that was wearing a suicide bomber jacket, essentially. And now everyone is happy. Yay.

Mando leaves Tatooine, and you see a recluse in the desert who had been watching this chain of events unfold (I know for damn sure there isn't a lot to do in the desert after a while to pass the time). And that man is, of course, Boba Fett. Or retired Boba Fett, rather. Following suit of Obi Wan Kenobi. GET YOUR OWN IDEAS BOBA!

I do love the series in the way that it brings those lessons about life and the insight we sometimes lack and need to be reminded of. And I do love the cuteness of Baby Yoda, most people do. Except now there are some crazy asses out there telling their significant others that they do not want to reproduce unless a small, big eyed and big eared little green baby with three-hands are the end result. But I digress. And I do think that Jon Favreau and Dave Filoni (he actually drew the first concept of Baby Yoda) have been doing a superb, nay, exceptional job with this web series. Along with the directors Taika Waititi, Bryce Dallas Howard, Rick Famuyiwa, and Deborah Chow from the first season. It'll be interesting to see how this second season goes, and what direction the series takes us into. Hopefully there will be other reveals and things uncovered from Star Wars lore. And what other actors/actresses have been given guest roles?

And I whole-heartedly believe that Pedro Pascal nails it as Din Djarin, the Mandalorian. I have to throw in that I thought his acting in Game of Thrones was wicked, where he was Oberyn Martell, the Red Viper.


A special thank you to my friend Sheedo Magneto Esquire, fellow Detroiter and artist. He sketched the Boba helmet on the slap (postal sticker) and has given me permission to use it in this article and on my site. Check him out, his links are below: