Leave The Gun. Take The Cannoli.

Yeah the title has no relevance here. Well, except for maybe this one teeny-tiny useless piece of information concerning my own self. You see... I've always been among people who go absolutely crazy for a cannoli. It's a pastry; I keep thinking is that it's the Italian version of baklava (which when pronounced correctly by an Arabic speaker is "bak-lawa"). Just thought you might need to know that just in case, you never know when you'll need to know how to correctly say the name to a dessert. But back to my story...

So I always find myself in a group where people lose their shit over a cannoli. And I've had people always tell me that I should try one. That it is the absolute best thing ever invented, and "OH MY GOD YOU'LL LOSE YOUR F-ING MIND!!!" Alright, so finally I had one at Buddy's Pizza in Ann Arbor. This was a couple years ago. In hindsight perhaps it was not the most authentic place to consume a cannoli, but it's as close as one can get to Italy on a Sunday afternoon; they serve Detroit-style pizza, and a variation of pasta. Authentic-enough, right? I actually believe it was some holiday, and someone did not want to eat their miniature cannoli. This might rub some people the wrong way, but yeah, I'm not really a fan. Am I that one odd duck who isn't all about dessert? Possibly. Long story short, that's the end of my not-so-awesome experience. The title comes from The Godfather (1972). It always made me laugh because it was a very random thing for the character Peter Clemenza to say to another mafia henchman (mafioso). If you ever want to impress someone with trivial knowledge, Richard Castellano had improvised during the scene. 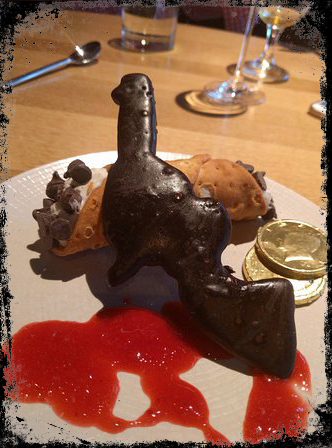 I might give it another go if I were back out in Seattle, Washington, at a restaurant called Shaker+Spear, located on 2000 2nd Avenue. I guess if you're in the northwest and decide you want a creative dessert, there you go. Wait, I guess I should be literal as some people are, and very much so. IF you're in Seattle, go there. Because if you're in Portland that's a long ass walk to get a cannoli. Or a very expensive Uber ride.

I only remember being very excited about finding a place to get fish and assorted other seafood near Pike Place Market, and that was because it was called Ivar's. And Ivar is the name of my American Pit Bull Terrier. Naturally I had to swipe some napkins with the name printed on them. It's the little things that make me smile. And speaking of which, Ivar's is having a Veteran's Day Promotion with free entrees.


The other day I decided to upgrade my World of Warcraft account with the upcoming new expansion, Shadowlands. I had also decided to make a new character to level up, mostly out of sheer boredom. I logged on to the Draenor U.S. server as my level 120 Horde Blood Elf Rogue, Sinapse, then noticed that Blizzard dropped the leveling cap back down to 50. So when Shadowlands does release, the players will have to level up to 60, rather than 130. I believe this was done in an effort to attract new subscribers, and to not overwhelm anyone who might be considering playing World of Warcraft after their buddies talk them into it. I do know that the leveling system, and how long it took, often discouraged new players. I think that may be one reason why Blizzard created the Classic World of Warcraft AKA Vanilla WoW (vanilla simply means old school) servers--creating a realm where new players and the OG players who missed the camaraderie involving guilds and group experiences could go escape from what they referred to as "retail WoW". Hate to break it to them, but either way it was retail. Because you were paying for vanilla and retail, couldn't have one without the other. But I digress.

So the changes that took place after last week's patch for the upcoming expansion left me unsettled. I didn't really have an opinion as to whether I loved or hated the direction the game is heading in. Honestly? At first I hated it. I created a new Alliance Worgen Rogue on the Bloodfurnace U.S. server (his name is Jacian), and as soon as he was created I was given a choice on where I'd like to have him assigned to. It used to be that Worgens were started off in Gilneas, which I could never stand. Those quests bored me to death. So I chose the new starting area. Apparently it's some sort of shipwreck island... thing. And I was pissed because Blizzard had made it so easy to level up quickly. And you could earn gold coins without much effort. The other thing that started to annoy me was all of the quick tutorial tips that kept popping up. But you might ask, 9thninja, man, why were you so pissed about a game? Because it took me eons to level up my Horde Blood Elf Rogue. And it took me forever to earn that first gold coin. New players will never feel the pain of running on foot to their quests and dungeons until level 40. And they'll never know the time consuming grind to get the gold to learn the Riding skill and to buy that first mount. Now they're practically given to you.

But I do see the point. And I understand why Blizzard did this.

One cool thing? I noticed that now I can fly in areas where I didn't have the flying skill previously. And that's making my character's life a bit less stressful. It's made earning a few achievements easier than ever before.

I wonder if Blizzard made bank due to Covid-19? I mean, with many states locked down earlier in the year and everyone staying home, did more people play? What do you think?

I know last year between Thanksgiving and Christmas I started playing Star Wars: The Old Republic again, partially due to The Mandalorian. And yes I was one of those nerds who decided that I should make a Bounty Hunter, and I was in a guild with other Mandalorian Bounty Hunters. I had leveled that character to the max. Then went back to playing a Sith Marauder and maxed his level. Because you know me... Jedi in the streets, Sith in the sheets. Rawr.

I cannot wait for the new season of The Mandalorian, Baby Yoda... rather The Child, and Mando are the best relationship I've seen in a while. The second season series premiere is October 30th, so get Disney+ and stream that ish.

Martini. Gin, not vodka. Obviously. Stirred for 10 seconds while glancing at an unopened bottle of vermouth.

Eggsy, The Kingsman: Secret Service (2014), schooling the bartender on the-one-and-only way to make a martini.